Posts from the ‘Grilling’ Category

So last week…we had some pork and later last week…we needed to eat up what little was left and what better way than to make the traditional Cuban sandwich! 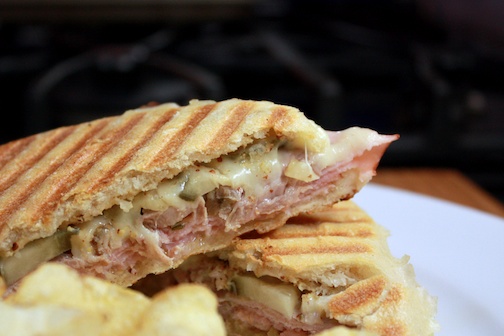 According to my sources (the interwebs of course – nothing but the best for you readers!), all Cuban sandwiches contain roast pork, ham, pickles, swiss cheese and a spread of mustard and are always served hot off the presses. Sounds like a pretty pungent sandwich, right? Wrong…it’s delicious, strongly flavored…but apparently many wrongs make a right!

Do you live near a Trader Joe’s? Good! We find that using the mini-ciabatta loaves which are only par-baked and ready to be crisped up before serving are perfect for any panini. Soft enough to let the panini press squish it a bit and grill up the outside but not so much that when you take a bite, you either get all bread or only the filling.

Moving on…slice the bread and spread with mustard on both sides, we happen to be fans of this one from Sierra Nevada Brewing. We also like their beer…but that’s another post! Layer a few slices of ham on the bottom side of the sandwich, cover with slices of the roast pork. 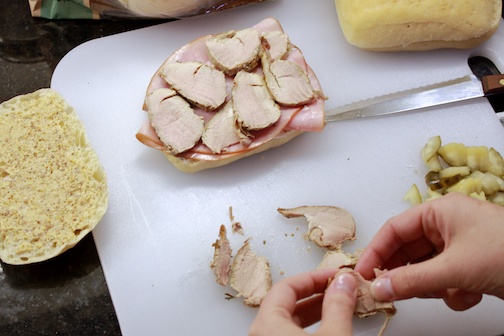 Having only dill pickle spears in the house…which I thought too difficult to slice lengthwise, I was relegated to many little slices of the spears. 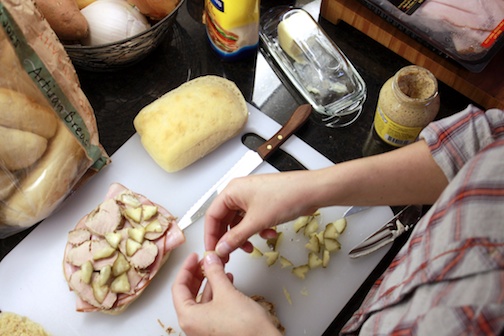 Ready for the swiss cheese, layer it on and give a light sprinkling of salt and pepper. (Remember rule #4 – season at every step! – It’ a rule…maybe not rule #4…but it’s a rule.) 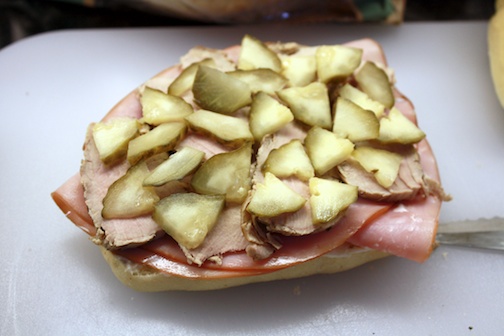 Top with the other half of the bun and get it into your panini press stat…or fry pan…or whatever works for you. 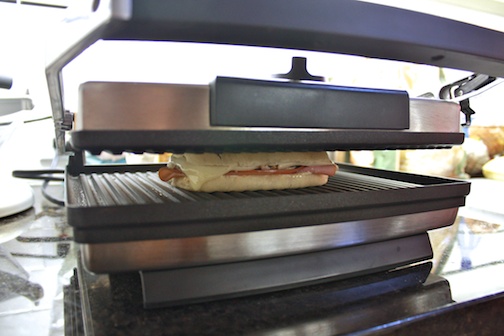 Once the cheese is melty, the bread toasty, and the filling delicious-looking…pull it off the grill and cut in half. (Also…make a giant mess for just one sandwich!) 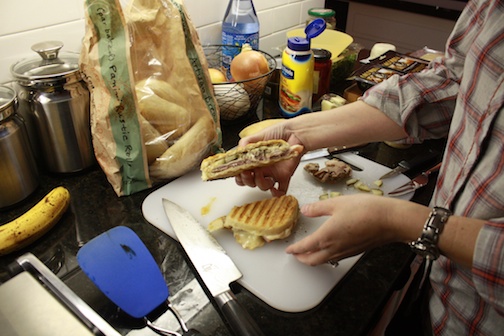 Serve with crunchy potato chips and a pickle on the side. 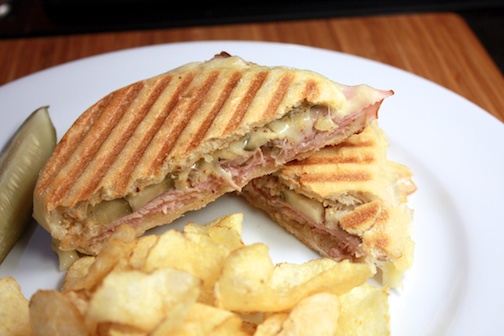 Dig in (and then wish you had a little more leftover roast pork).

In lieu of additional pork…throw together another sandwich with ingredients found in your fridge! 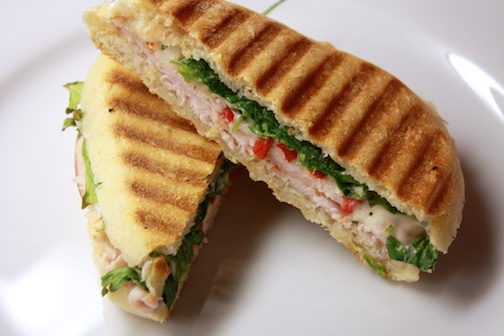 I love panini night…you never know what might make it into a sandwich! Do you have a favorite filling? 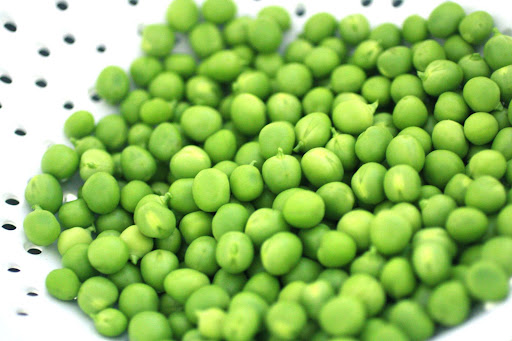 I love me some summer, and all the light fresh summer dishes that appear at potlucks and barbecues this time of year.  However, I have a confession.  I have a love-hate relationship with peas.  Mushy green things were a common side on my plate growing up and I remember many a night when I sat at the table long after everyone else had finished…and all I had to do was eat 3 more bites of peas.  Gross!  Then I grew up (a little) and met fresh english peas…treated with the respect that such a pretty and perfectly petite vegetable deserved.  I loved them.  I convinced myself that they were two entirely different things that shared no common traits.  I’m still wary of pea dishes and always approach them with suspicion.  This little dish is shockingly simple but more than the sum of its parts. 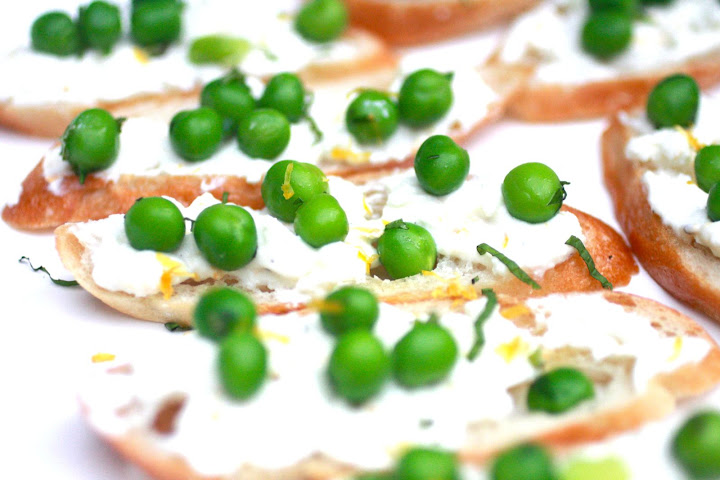 English peas, shelled
Feta (about 8 oz.)
1-2 tbsp.’s of ½ & ½ or milk
Fresh mint
Juice and zest of 1 lemon
Salt and pepper to taste
1 Baguette or crostini toasts
Sea salt for finishing

Start by blanching the peas in heavily salted boiling water for no more than 2-3 minutes.  Before you toss the peas into the pot, prepare a bowl of ice water and place it in the sink.  When the time is up, remove the peas and pour into a colander and then immediately submerge them in the bowl of ice water.  This will shock those little peas and keep them from overcooking and it sets the bright, fresh green color.  Once they have completely cooled, go ahead and drain the peas.

Next, get the feta, drain it and place it in a medium size mixing bowl.  I used half of a 16 oz. package.  Using a fork, mush up the feta and slowly add the ½ & ½ or milk.  Mix it up until it is a nice consistency for spreading on toasts, err on the side of keeping it a little thicker than you think.  First zest the lemon and then slice in half and squeeze all the juice out into a bowl or measuring cup.  Add in a tbsp. of lemon juice, a tsp. of the lemon zest, a sprinkling of salt and a few grinds of fresh black pepper.  This is a taste-as-you-go-recipe…so keep tasting and adding ingredients as needed.  You want a creamy spreadable feta with a floral lemon notes from the zest and a bit of zing from the juice.  The black pepper can be a prominent flavor as well.

Let the spread chill in the fridge for a bit.  Now grab the cooled peas and throw them in a bowl.  Take 5-10 mint leaves and stack them on top of one another, starting on the long side, roll them up like they are a yoga mat and then slice them very thinly.  Poof!  Chiffonade!  Sprinkle the mint into the peas, add some salt and maybe just a touch of lemon juice.  We brought these over to a barbecue…so I packaged everything separately and built the crostini on location…no one likes a soggy crostini.  Oh…did I mention the crostini/toasts…yeah, make them.  (Slice baguette thinly, drizzle with olive oil, sprinkle with salt, lay in a single layer on a cookie sheet and then put in a 375º oven for 4-6 minutes – watch them carefully…you want them to dry out a bit and get just barely toasty, remove from oven, flip them over, repeat the drizzling and sprinkling and toss them back in the oven for another few minutes…maybe only 3 – cool completely and store in airtight bags.  Voilá…Crostini!) 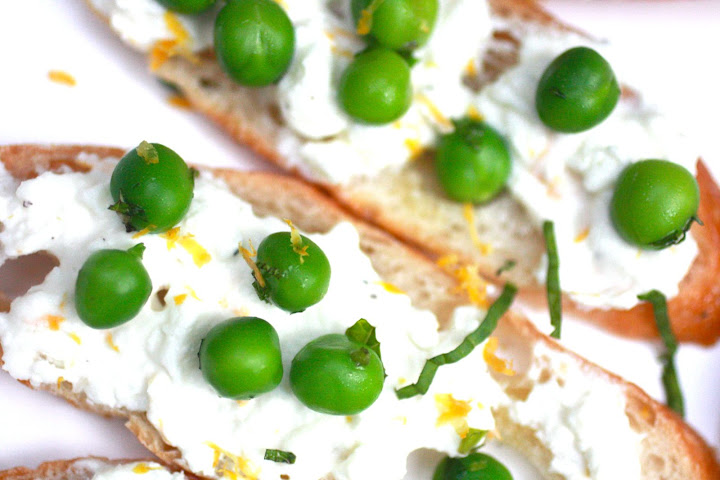 Time to assemble the toasts:  spread on lovely layer of feta, place the peas over the top, add a little lemon zest, a little mint and finish with some flaky sea salt. 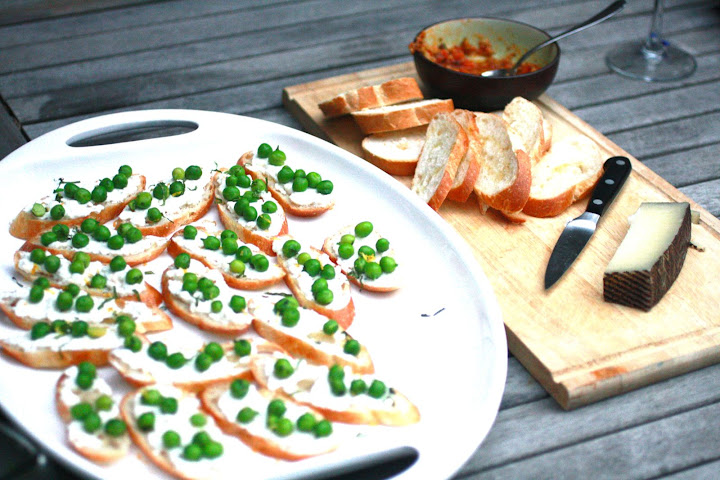 The other parts of this barbecue are SO worth mentioning…we grilled some white salmon that marinated in 3 mustards, tarragon, olive oil and a little vinegar. we’ve been lucky enough to cook some white king salmon once before! 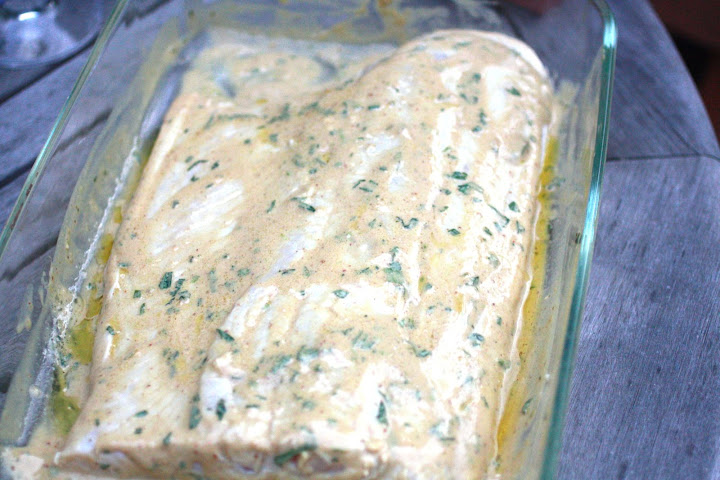 It’s hard to make asparagus better than when it is lightly oiled and thrown on the grill! 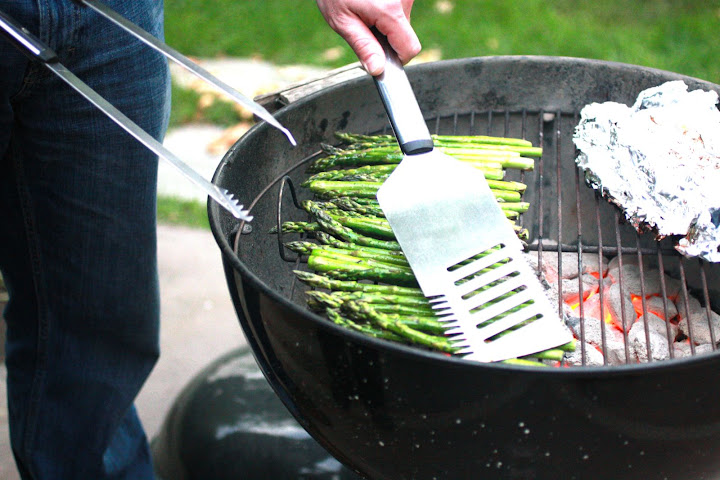 This is Juno, the sweetest Doberman we’ve ever met…she makes our Cleo dog look like a miniature breed.  They are good friends and neither one of them minded when they got to nibble on a little of the cooked salmon skin! 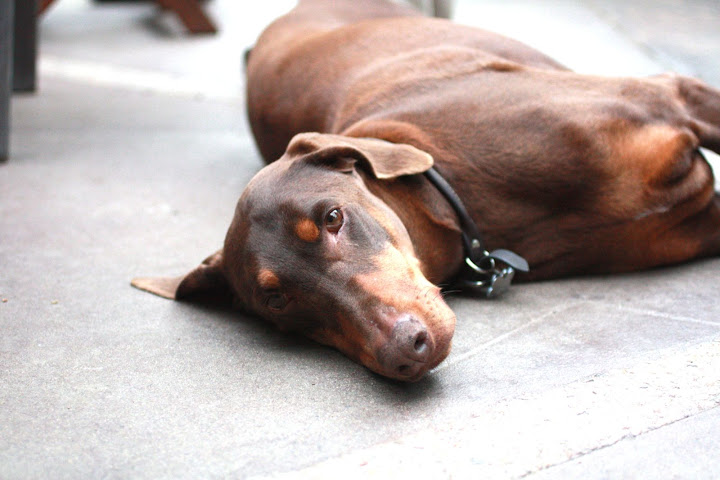 We used some foil under the salmon as we could not bear the thought of losing even the slightest morsel to the slots on the grill. 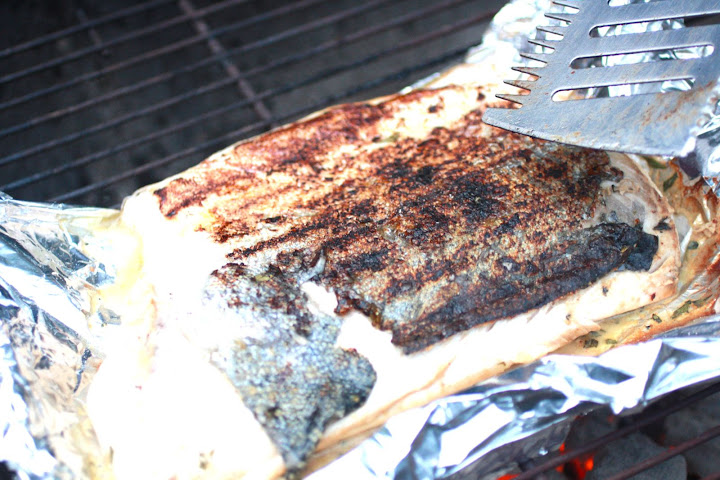 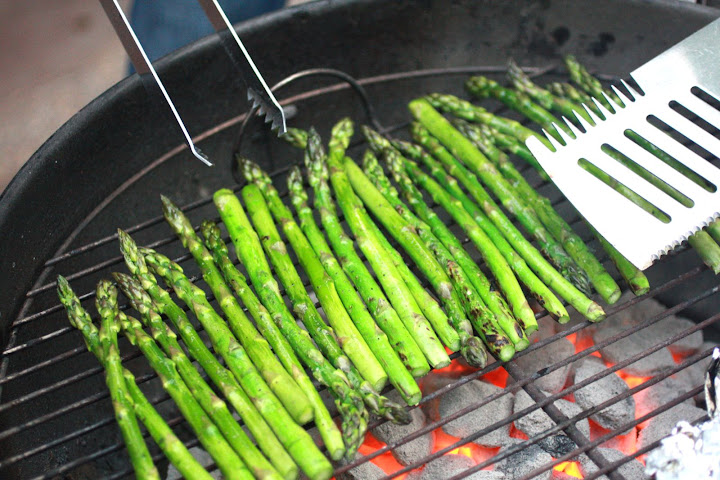 We finished the salmon with more fresh tarragon and some fresh lemon.  And if you look really closely in the upper right hand corner of the photo…you’ll see some delicious sautéed fennel!  Unfortunately…no other photos are available of the complete dinner since I must have been on a trampoline when I took them – they were THAT blurry! 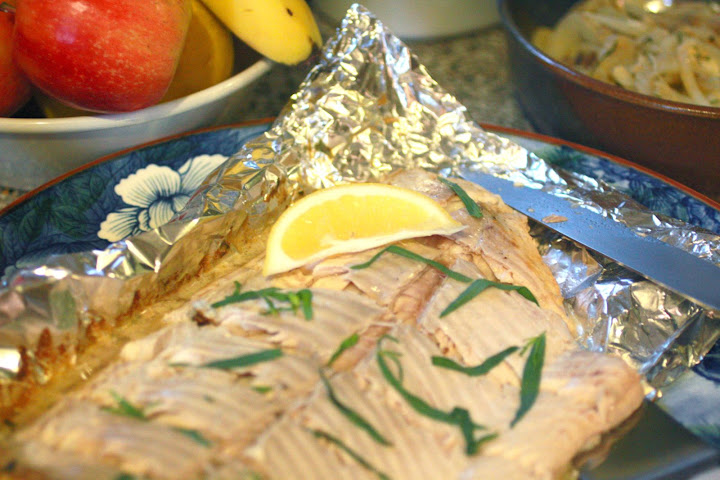 Sometimes, enjoying the meal with friends, while it is actually hot, is more important than getting the perfect shot!