Pumpkin Stuffed with Everything Good

No…really…this is nothing more and nothing less than a small pumpkin stuffed with everything good!  As it is the first day (FINALLY) of fall weather here (actual rain is falling as I type), I will take a brief break from my tomato and corn obsession. 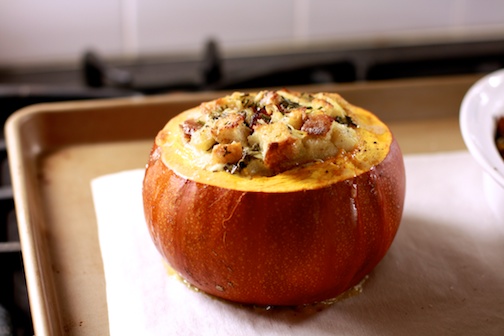 I am not the first to plaster this recipe on a blog…and I certainly won’t be the last.  This is surely a recipe that will span the test of time…and on the interwebs, that is not something to take lightly.  Take Pinterest for example; it is chock-full of seasonal sweets that utilize cookie dough, a popular candy bar and for good measure, some marshmallow fluff (examples found here, here and here).  Admittedly, my sweet tooth prefers understated, almost savory desserts (I’m not calling myself objective here!) and while these recipes have a purpose (bake-sales, holiday parties, novelty, etc.), our grandmothers would not recognize them from their recipe repertoire.  They are trends.  They may, in fact, even taste good…but they are not staples and certainly not classics.  I’m sure many out there disagree with me and that is fine…as I firmly believe that it takes all kinds.  This recipe is a classic for so many reasons – it is more an idea than a recipe, it is flexible, it is seasonal and does not waste any bits, it can be made up of leftovers and pantry items or each ingredient bought for its specific purpose, it is cheap and can serve a crowd.  For these reasons and many more, it has a place in my recipe box.  A quick google search will prove this true for many others.

The recipe is available all over the web, however I’ve posted it here is taken directly from Dorie Greenspan‘s book Around My French Table.  This dish epitomizes a perfect change of seasons dish…still emphasizing the freshness of squash while the filling is casserole and stuffing all wrapped into one.  Serve it with a crisp salad lightly dressed earlier in the fall or with some seared chicken sausages when a chill in the air is familiar and calls for heartier meals. 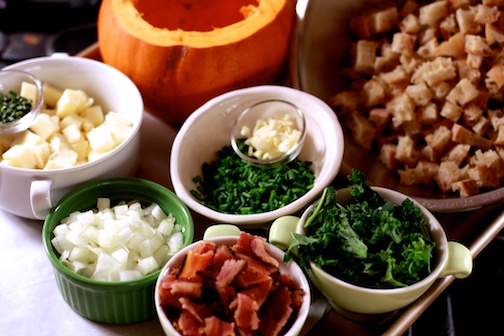 Center a rack in the oven and preheat the oven to 350 degrees F. Line a baking sheet with a silicone baking mat or parchment. 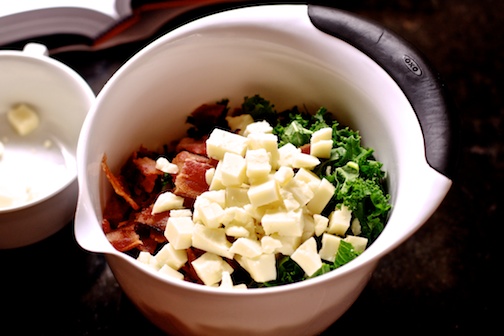 Toss all the stuffing ingredients together in a bowl (bread, cheese, garlic, onion, bacon, and herbs).  I had some kale on hand, so I chopped it up and tossed that in as well.  Season the mixtures with fresh ground pepper and some additional salt being careful not to over-salt as the cheese and bacon are already a bit salty. 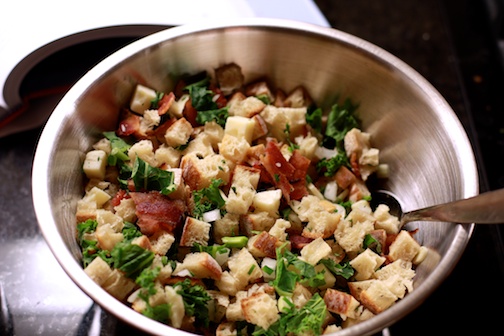 Pack the mixture into the pumpkin…make sure it is filled!  We ended up with enough stuffing for an entire additional casserole dish which we buttered before adding the stuffing. 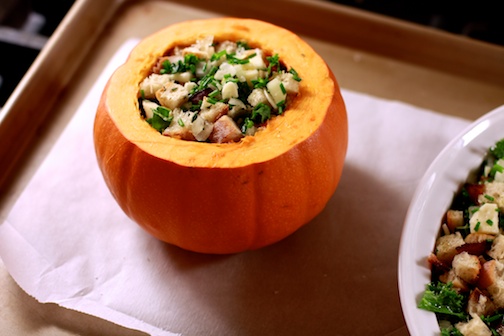 Mix the cream together with the nutmeg and of course, season with salt and pepper and then pour it over the stuffing into the pumpkin. 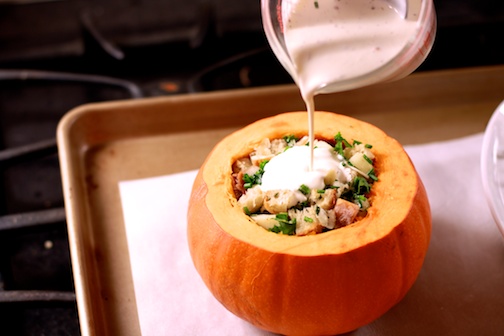 The cream provides the majority of the moisture for the stuffing, so don’t skimp…but your stuffing should not be swimming in the cream either. 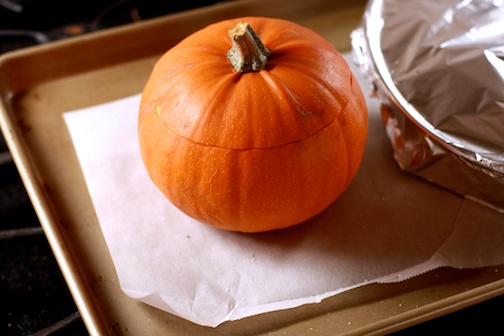 Put the cap in place and bake the pumpkin for about 2 hours—check after 90 minutes—or until everything inside the pumpkin is bubbling and the flesh of the pumpkin is tender enough to be pierced easily with the tip of a knife.  It was so cute, I could hardly stand it! 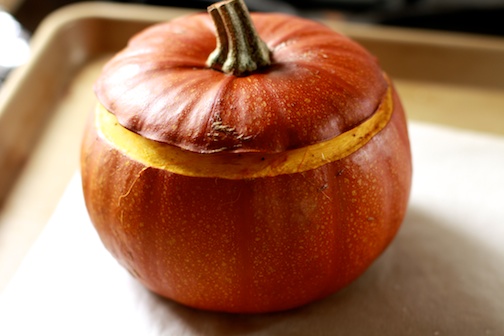 Because the pumpkin will have exuded liquid, I like to remove the cap during the last 20 minutes or so, so that the liquid can bake away and the top of the stuffing can brown a little.

When the pumpkin is ready, carefully, very carefully—it’s heavy, hot, and wobbly—bring it to the table or transfer it to a platter that you’ll bring to the table. 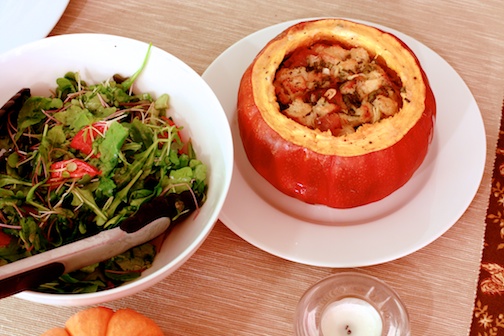 I cut wedges and plated it with a lightly dressed salad the included some microgreens from Trader Joe’s. 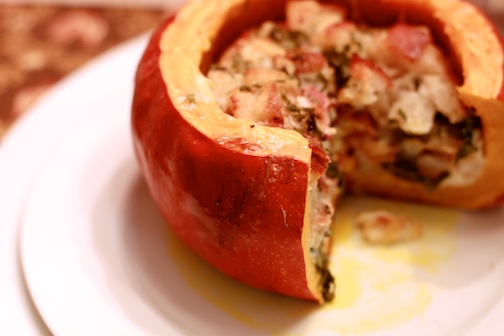 The stuffing itself is delicious, but with a scoop of the tender pumpkin flesh, it is *literally* a perfect fall dinner.  I’ve got so many ideas of what to stuff a little pumpkin with…sausage, wild rice, apples, linguiza, chestnuts, the list is endless!  What would you stuff your pumpkin with? 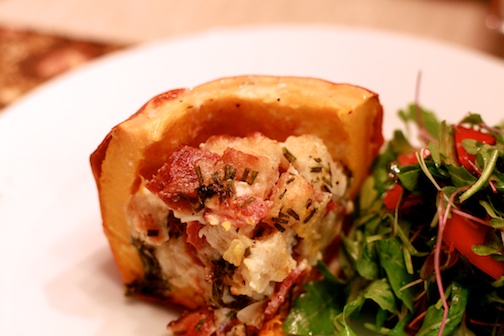 It is wonderfully chilly outside now, but I need to temper my excitement for fall as the forecast is calling for 90’s next week.  Look for yet another post containing corn or tomatoes…or both.