Desserts in the summer should be delightful.  Fresh and vibrant.  I think you get a little more leeway with summer desserts…it can be an unexpected little something to try…so serious expectations.  So I say, run with it.  Try something new, be a little different and surprising!  Polenta cake fits the bill.  Think of this as somewhere in between corn bread and a citrus cake. 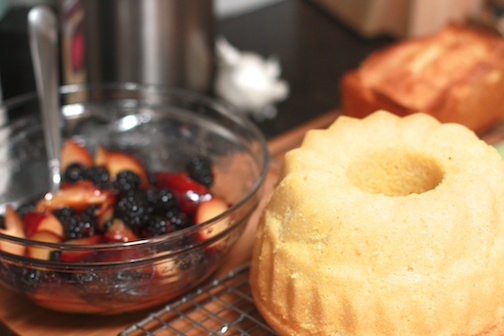 (Although I did not get the post up right on time, this cake was inspired by the Daring Cooks August Challenge…credit where credit is due!)

Rachael of pizzarossa was our August 2012 Daring Cook hostess and she challenged us to broaden our knowledge of cornmeal! Rachael provided us with some amazing recipes and encouraged us to hunt down other cornmeal recipes that we’d never tried before – opening our eyes to literally 100s of cuisines and 1000s of new-to-us recipes!

Original recipe can be found here at from the Bon Appetit website and is also on epicurious!

Position rack in center of oven and preheat to 350°F. Butter 9x5x3-inch metal loaf pan.  (I used a mini bundt pan and a quarter size loaf pan which seemed to hold all the batter.)  Dust pan with flour; tap out excess.

I used Golden Pheasant Polenta and the texture was perfect – coarse enough to notice but not so much that it ruined the texture of the cake batter!

Add eggs 1 at a time, beating well after each addition. Beat in vanilla. Add flour mixture in 3 additions alternately with yogurt in 2 additions, beating just until blended after each addition. Spread batter evenly in pan.Bake cake until golden and tester inserted into center comes out clean, 50 to 55 minutes (my mini pans took less time…I started them with 35 minutes and tested every few minutes after). 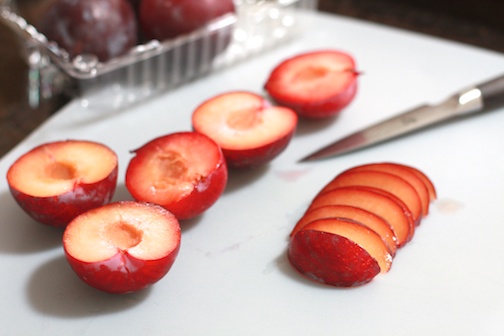 In the meantime, prepare the plums and blackberries so they have enough time to macerate.

Halve the plums (I used 3) and remove the pit and then slice somewhat thinly.  Add in a handful of blackberries and sprinkle with 2-3 tablespoons of sugar. 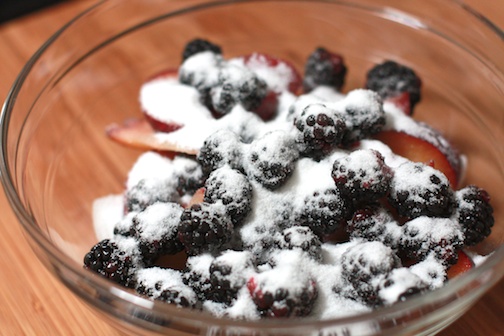 Toss gently and let sit for at least an hour. 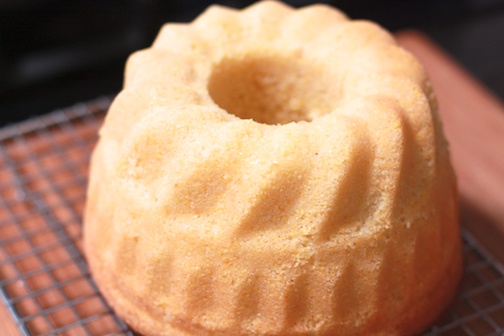 Run knife around cake edges to loosen. Invert cake onto rack, then invert again on rack (top side up). Cool completely. 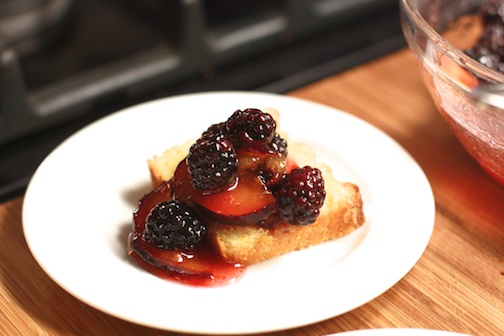 And for a little extra ummmpffff…top with whipped cream or vanilla ice cream.

This cake was delicious the next morning, sliced, toasted and spread with just a bit of butter.  I may have eaten it for a week straight this way!

Update:  Recipe should have included 1/4 cup of sugar…correction made below!

Apparently, I am a glutton for punishment…I tried again. 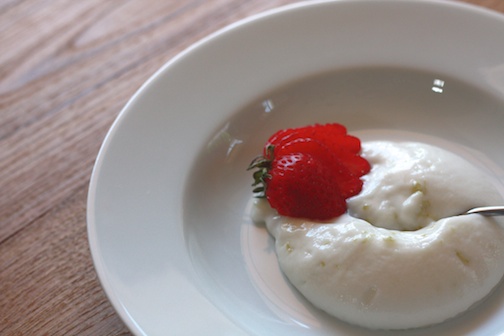 But wait, you say, that doesn’t look like a vanilla bean buttermilk panna cotta…why didn’t you attempt the same recipe?  Well, because I am difficult.  I figured something had to go my way if I made a completely different recipe that included no dairy whatsoever, right?  Hmmm…the answer is not as clear as one might think – yes and no.

Success…YES!  (as it did not separate).  And FAIL…it didn’t actually totally set…but I have only myself to blame for this one.

In “collaborating” (read: angrily discussing) with my brother who seems to end up with nothing but perfection when he makes panna cotta (all varieties, I might add) at his restaurant…he may have mentioned that the amount of gelatin can be tricky when using coconut milk.  What seemed to be like an extreme amount of gelatin…was apparently necessary.  I did not believe the recipe and (of course) thought I knew better…so this one is completely.my.fault!  There’s always room for a 4th or 5th or 27th attempt, right? 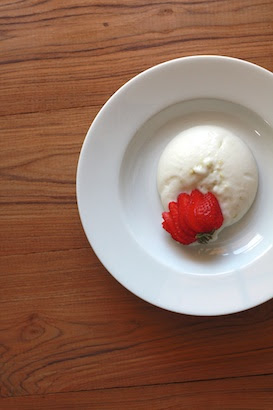 Nonetheless, it tasted spot on!  (see below)…and I recommend following the recipe to the letter…and I’m sure that your panna cotta will work out absolutely perfectly!  (mostly due to the fact that I am nowhere near your kitchen and therefore my luck (or lack thereof) will have absolutely no influence on your end-result!)  I repeat…follow the directions!

I searched and searched to find the recipe I used…and to no avail…so unfortunately…you won’t have the opportunity to make the exact recipe that I managed to flub up…so find your own.  Go, make panna cotta and succeed! 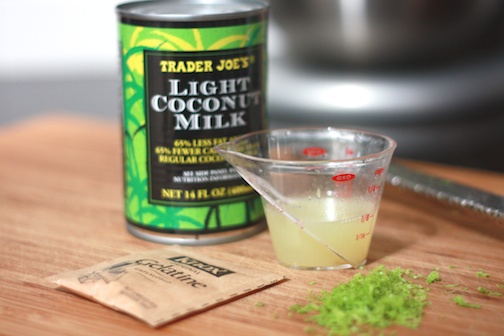 From my memory and photos….here is the recipe!

Pour lime juice into the sauce pan and sprinkle in the gelatin.  (my recipe indicated an entire packet of gelatin should be used…but I (incorrectly) assumed that I would end of milk bricks if I added it all since I was using half the milk previous recipes had called for with the same amount of gelatin.  Once it is bloomed, add in the zest and stir around a bit to make sure it is completely dissolved. 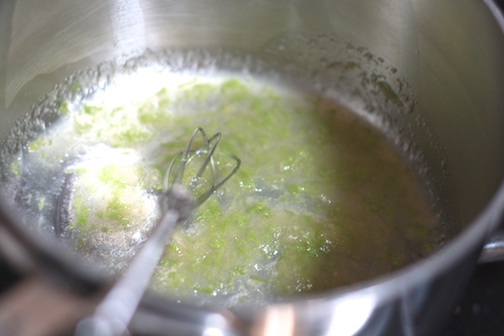 Next add in the coconut milk and sugar; heat gently until you see bubbles forming and there is steam rising.  Make sure you continue to stir during the heating so the gelatin, lime juice and zest remain suspended in the mixture.

Remove from heat and pour into small dishes or ramekins, cover with plastic wrap and refrigerate until set.  I pulled one out later that evening to try it.  Once again, we had guests and I was trying to avoid another big let-down of serving what appears to be a delicious panna cotta hiding a secret gelatin layer…or ending up a soupy disaster. 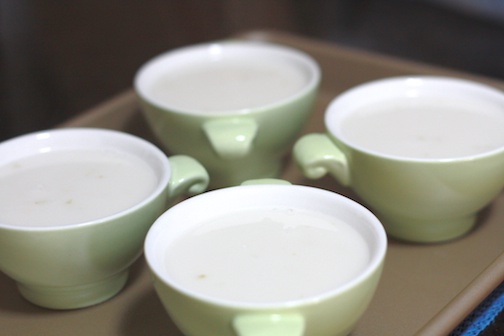 That evening, the panna cotta had not set and I convinced myself that it obviously needed some more time in the chiller.  I unmolded it in a shallow bowl and we all nibbled spoonfuls.  Flavor…perfect – refreshing, lime-y and not overly coconut-y.  Texture…too soft…a little like thin yogurt. 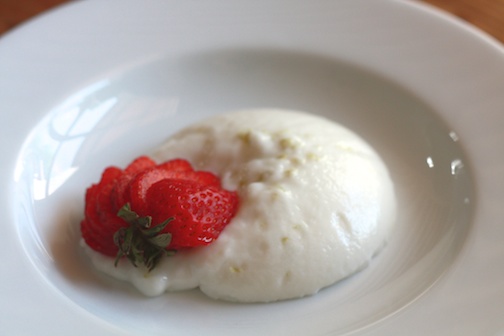 The next morning when I pulled one out and plated it, it was certainly more set than the previous evening…but not that heavenly texture that panna cotta should be!

Stay tuned for attempt #4.  I believe everyone has a cooking nemesis…like Kryptonite for Superman…perhaps panna cotta is my kryptonite!

What is your culinary nemesis?

I am aware that the holiday has passed…but let’s be honest…I’m always a little late to the party in this respect.  I’d like to think it is because I am too busy enjoying the moment to post recipes prior to an actual holiday or event.  Come to think of it…I would be awful working at a monthly magazine or for a fashion designer…having to always think a couple of months ahead.  I digress. 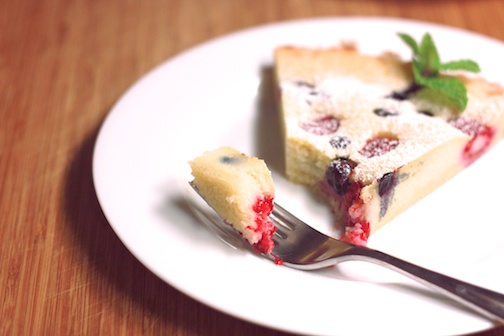 Here’s hoping you all had a wonderful 4th of July celebration.  I did not spot a single fireworks display…most of the west is currently on fire so many cities were erring on the conservative side.  However, I did spend the evening at the Oakley Rodeo!

What follows is one of my favorite desserts to make…it’s light, delicious, totally adaptable to whatever fruit may be in season and therefore appropriate for all times of year and it is quick to make.  I first learned to make this here and it is traditionally made with cherries with their pits still in them.  I also weigh the dry ingredients and use the metric measurements as it just seems to come out better. 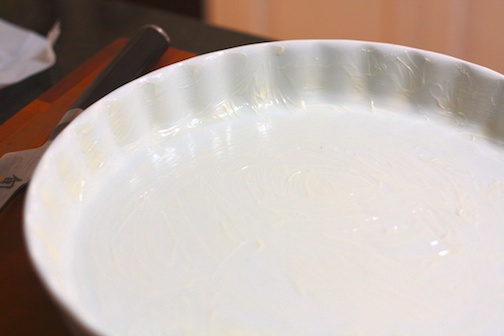 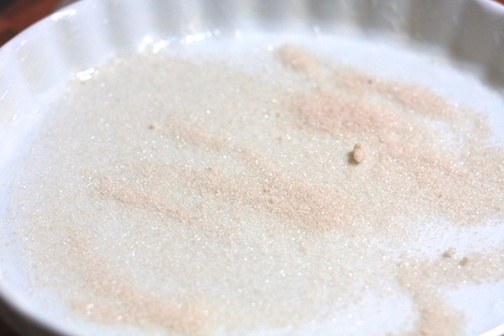 Butter and lightly sugar a heavy tart pan or dish and then chill. 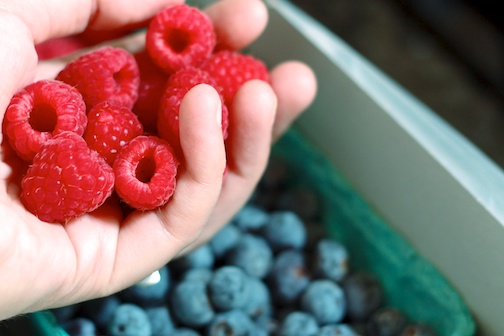 Place fruit in a single layer  in the chilled and sugared dish.  The exact quantity of fruit is up to you, but pieces of fruit should not touch. 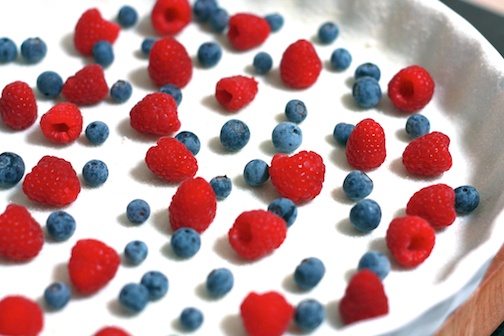 Weigh the dry ingredients (I made extra batter (1 and 1/3 recipes worth) for an additional individual clafoutis that never made the photographic cut) and mix all the ingredients together in a bowl.

Pour the batter into the dish very slowly and gently, taking care not to displace or move the berries too much. 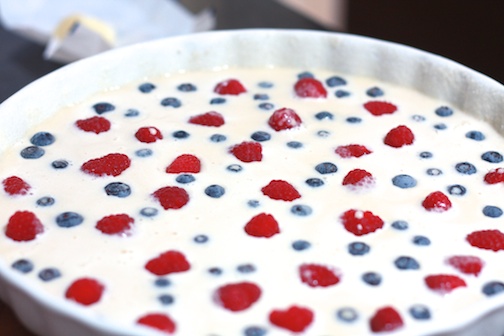 Bake for 40 minutes until just barely beginning to brown. 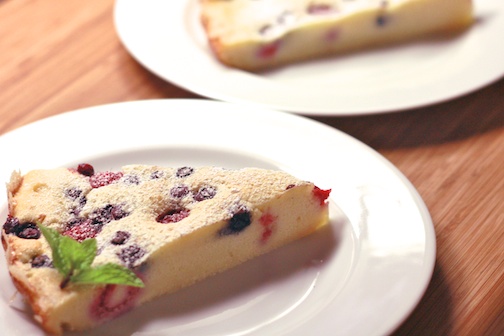 Serve warm or at room temperature, plain or garnished with powdered sugar, fruit coulis, or whipped cream with a sprig of fresh mint.

I could seriously eat the entire thing all by myself!

What are your favorite summer desserts?